Amaryllis McCrimmond - known as Liss - is an American Scottish Country dancer who has been touring in a show called Strathspey to try and emulate the success of the Irish Riverdance company. Unfortunately Liss suffers a catastrophic injury which will end her dancing career and she returns to Moosetookalook, Maine where her aunt runs the area Scottish Emporium to take over whilst her aunt goes back to Scotland to give a series of speaking engagements.

Liss settles in and takes her aunt’s stock to a Highland Games show, then returns home afterwards to find the woman next door has died in the Emporium stockroom floor. Of course Mrs Norris has been murdered and Liss ends up as the prime suspect as the investigating officer lacks personality, wit and imagination.

I checked out this book because the title made me laugh. The genre is “cozy crime” and won’t frighten the horses. There’s a lot about Scottish culture because it’s been written for an American audience and some of that made me snigger but apart from that it’s a popular introduction to a fairly long running series set in an imaginary Maine town. There are loads of red herrings and although the reveal wasn’t entirely unexpected it wasn’t a given who was/were to blame.
Top

I know! I looked it up because I thought there might be something similar but her fans have created a map which has spoilers for future novels. 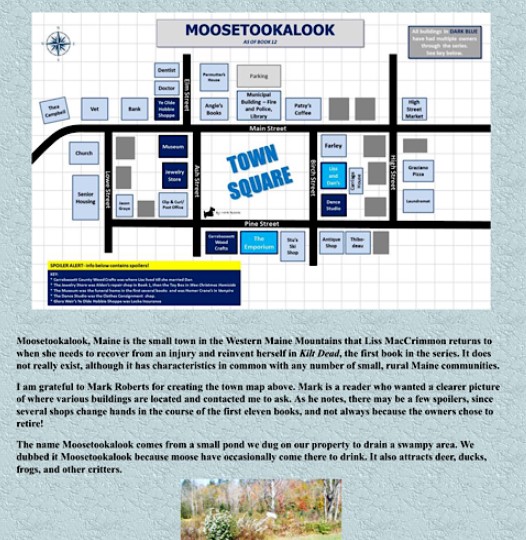