Salem mentioned this book in the "What are you reading at the moment" thread back in 2013 but never got around to writing a review. I know this because I always check to see if anyone has already written about a book on this forum.

Really enjoyed this one. Translated from Swedish, its just lovely from start to finish - even though some of the characters meet an untimely end in quite horrible ways. But that's ok because they are all the bad guys. Very simple style of writing but all the better for it and the plot gets ever more enjoyingly ridiculous as the book goes on.

Allan Karlsson has led an exciting life but took every adventure in his stride. What will be will be and if it includes a few glasses of vodka and a good meal in the process, it will be quite acceptable. So how could a man used to such an eventful life end his days in an old folks home, even if it is his 100th birthday? Allan decides its time to move on and as his is way, when he moves on, he tends to take other unwary people along with him but then what will be is generally not that bad for most people he touches.

The people he touches in this story are a gang of hells angels, a petty thief, a hot dog salesman, a beautiful middle aged woman with a dog and an elephant and a few members of the legal system who suspect the worst. I don't think it spoils the ending to say that most of them live happily ever after because the real beauty of the story is the way its told.

Highly recommended.
Yes this is the real "Little John"
Top

I like a bit of translated work from time to time.
Top

Ha.... I was considering writing some thing about this book
The translation works well and found the book surprisingly good and quite funny in quite a few places
To display sig. banner ...key alt+F4
Top

Started well and friends of mine loved it but he got on my nerves after a while.
Top

Oh! Why?
Yes this is the real "Little John"
Top

The film was good also, a mixture of Swedish and English. I felt the translation worked very well in the book.
Top

Hard to recall but it started so well and I liked the beginning but when he started droning on about all the famous people he'd met and worked with etc etc I just felt it was too contrived and got irritated by it.
Top

It was contrived but with a purpose. Quite ridiculously exaggerated but then the whole story was. But it was funny. Did you see the film?
Yes this is the real "Little John"
Top

I thought there was a review of this by John already but I couldn’t find it so here’s mine.

Allan Karlsson crawled out the window and creaked away from his old people’s home just before his 100th birthday party was to start. Allan is a man, like an elderly Forest Gump, travels the world causing and stopping explosions and wars. When not dining with Presidents and world leaders, Allan is by turns a mental defective being experimented on, a prisoner in the Gulag and a spy gleaning information in public libraries which will influence the outcome of the Cold War. What makes this interesting to read is that it happens, almost exclusively, because Allan falls into scenarios unawares usually under the influence of vodka. He is the person who says the right thing at the right time and hilarity ensues.

Add into the mix a pursuit due to his accidentally picking up a suitcase of Swedish gold crowns and the accidental deaths of each gangster sent to deal with him- including death by elephant- and you will be chuckling along with each new chapter of the absurd. More Mr Bean than James Bond but I genuinely laughed my way through it to the extent that often I had to close the book to enjoy that joke properly before going on to the next one. My favourite is the one about Mr Dollar in the cockpit of a plane. You’ll know it when you read it.

If you like your baddies despatched by circumstances rather than weapons give this book a read.

If anyone wants me to pass it on, let me know. 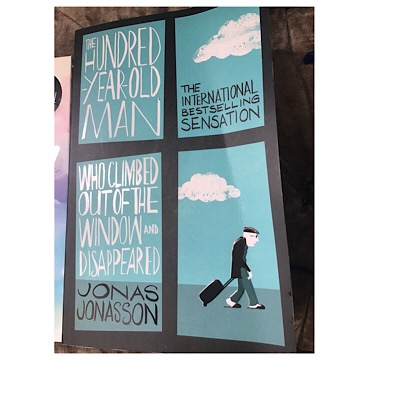 Told you it was good. I was also impressed by the translation and the feel of the book.

I knew I had read something by you but no joy with putting the word hundred into search.
Top

One word searches are often ignored as the single word is deemed too common i.e. hundreds (sic) of results.
It's (search) designed to work with limited resources i.e. shared/vps hosting and not shedloads of google type cloud server farms.
"hundred year" brought up the required results .

Seems to be , not too bad